[Extract from Trekking with the T-Team: Central Australian Safari 1981]

We charged along the unsealed highway with no break for lunch or snacks. Dad’s need to reach our destination of Kings Canyon before nightfall compelled him ever forward, resisting the temptation to rest. We did however stop to change drivers.

Our sacrifice of food on the altar of time-saving ultimately caused us to lose time and our way. The signs for Kings Canyon appeared at regular intervals teasing my hope that upon reaching there we’d eat.

An ungraded track emerged at a forty-five-degree angle to our right. Hunger pains stabbed at my stomach and my head was dizzy distracted with thoughts of food. Pancakes, soft juicy pancakes. MB (my brother) drove past the trail over-run with dry scrub.

I glanced back at the track. ‘I think we have to turn down there.’

‘Oh, alright.’ MB sighed and reversed the Rover to the turn-off and swung into the narrow rocky track.

We jerked along the spinifex-strewn trail at a leisurely ten kilometres an hour making good use of the Rover’s four-wheel drive. The path petered out to a stop in a small clearing of jagged rocks. Beyond the tee trees we noted a shallow gorge dipping into the low hill face.

C2 studied the bland geological offering. ‘Is that Kings Canyon?’

‘Must be.’ Dad swung his pack onto his back. ‘Come on everyone, let’s go and explore it.’ He crashed through the bushes towards the gorge.

MB hung back, playing with the straps of his rucksack. ‘I don’t know, it doesn’t look right.’

With Dad pacing through the bush, I ploughed through the dark chaos in the back of the Rover in search of food. In my initial search through the jumble of bags and boxes, I found nothing resembling food, not even scraps.

‘Hey, look!’ C1 cried in the distance behind me. ‘Watermelons!’

I reversed out of the barren back of the Rover and turned to look. Dad stood at the edge of the clearing glaring at me. ‘Come on, Lee-Anne!’ He gestured chopping the air. ‘Hurry up!’

‘What’s the rush, Uncle?’ C1 cradled a football-sized melon in his arms. ‘First we must have our sustenance before we embark on adventure.’

‘There definitely weren’t watermelons when I last went to Kings Canyon.’ MB held the yellow-green ground fruit and examined it.

Dad re-entered the clearing and stamped his feet. ‘Come on, Lee-Anne, or you’ll miss out.’
I picked up my pack and exhaled. ‘Oh, do I have to?’ A battle in my head began. I wanted to explore what I thought was Kings Canyon, but I also wanted what appeared to be a watermelon. But what if the valley up ahead wasn’t the famous Canyon? And what if the melons weren’t watermelons? Oh, I just didn’t know what to do. With the rucksack weighing on my back, I hovered above some stray watermelon-looking melons, and then glanced at the beckoning gorge.

MB raised the huge melon above his head and then swung it down onto a rock smashing it in two. ‘Oh, just a paddy melon after all,’ he grunted kicking the sallow pieces into the scrub.

‘But I was looking forward to watermelon,’ TR said. ‘Oh, well, I’ll just have to wait.’

The lads slung their bags over their shoulders and lurched into the bush following Dad.

We trailed behind Dad, our collective stomachs generating a chorus of grumbles as we advanced towards the valley.

We reached the mouth of the gully. Dad turned to my brother. ‘Alright, where to now?’

‘Well, I’ve been there before and this looks nothing like it.’

We watched Dad’s hunched shoulders as we tramped back to the Rover.

‘I feel weak,’ I squeaked hoping the hint might prompt Dad’s conscience to stop and permit us to eat.

‘And whose fault is it that we were led astray?’ Dad said. ‘We have to find camp before dark. We’re running late.’

Starving and defeated we piled into the Rover and Dad made laboured progress along the sandy track. We jerked to a stop. The engine strained with a piercing whine as the tyres spun in the sand. Dad stopped. He adjusted his hands on the steering wheel and pumped the accelerator. The tyres whirred and shrieked, but the Rover didn’t budge.

‘Okay,’ Dad turned off the engine, ‘everyone out and push.’

In one fluid movement, we alighted from the Rover. MB disconnected the trailer while C1 and C2 dug out sand from the bogged back wheels. Dad and TR stuffed spinifex under the tyres. I floated around the edges of activity watching the men do all the work. I’m starving remember. With the hole prepared, all of us young ones laid hands on the Rover’s rear end and with Dad in the driver’s seat, we pushed. The Rover sprang forward, released from the bondage of the sand.

Now you’d think that with no food or drink in our system, there would be no need to answer the call of nature. Wrong. As we reached the turn-off, the need to answer nature’s call caused me to cross my legs. I had to go. MB too. I tapped Dad on the back. ‘I have to go.’

‘We’ll be eating in the dark.’

‘Don’t care.’ I rocked from side to side, the urge getting beyond the point of no return.

‘I have to go too,’ MB said. An unpleasant smell permeated the cabin as he reached into the glove box for the loo paper.

Dad halted the Rover. ‘Alright then, but don’t take too long.’

‘That might be difficult where MB’s concerned,’ C1 said.

MB and I leapt out of the Rover and darted in opposite directions through the bush.

Upon our return, we spied Dad chatting with a man dressed in khaki shorts and top.

They were leaning up against a baby blue mini bus emblazoned with the sign “Bill Kings Tours” on its side.

‘Nah, mate this isn’t Kings Canyon. This is Penny Valley.’ The man waved a few flies away. ‘The Kings Canyon turn-off is a few miles up the road.’

‘See I told you,’ MB said as he approached the men. ‘I kept telling you it wasn’t the right one.’

‘Ah, well, we better get going.’ Dad shook the tour guide’s hand and we sped along the unsealed road hunting for the sign for Kings Canyon. 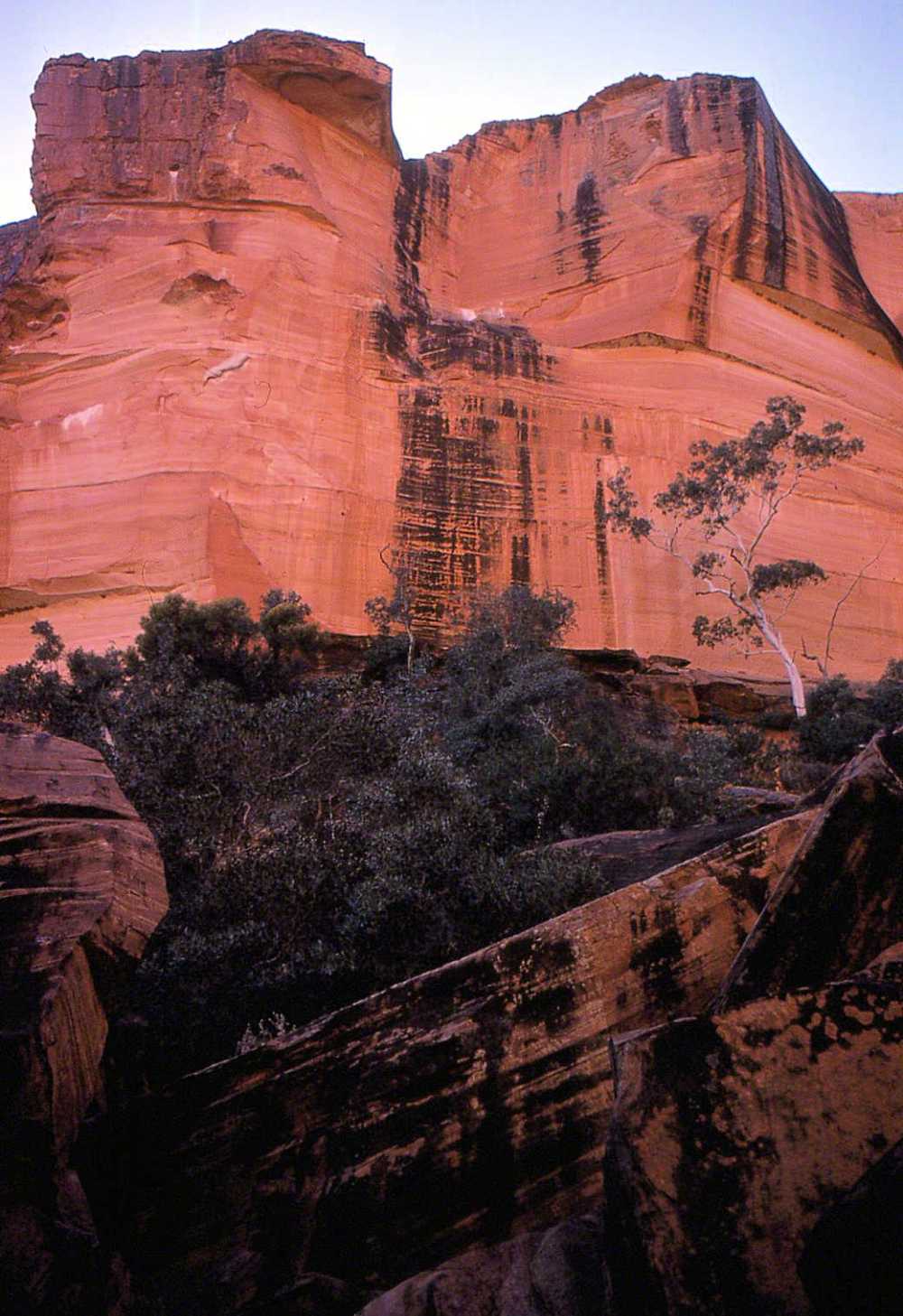 Late afternoon and the sun sank lower towards the horizon as we found the entry into the valley leading to Kings Canyon. The steep cliffs glowing golden in the afternoon sun looked like slabs of freshly fried pancakes soaked in maple syrup to me. I hadn’t eaten since breakfast, so everything resembled food. Whilst we’d travelled the corrugated highway, I’d scrounged the deep recesses of the Rover’s back cabin and collected a few nuggets of sultanas.

Then, during the time the men scouted for water, I wandered off by myself to squander those few precious relics of dried fruit and savour their shrivelled sugary taste. But the mere morsels were not enough to satisfy my hunger and I cried. Now I had an inkling of how starving felt. Didn’t make me feel any better, though.

Wiping tears from my eyes with the back of my dusty hand, I stiffened my trembling lip and then shuffled back to the Rover.

TR, also suffering the pangs of hunger, strummed on the Ukulele singing:

“You can skin me
And eat my bones
I don’t care.
Because I’m hungry.”

The lads and I tapped our toes and bobbed our heads to the beat.

Dad didn’t share our concern or need to feed. He was driven by the desire to find a camping spot before sunset and prepare tea (we hoped) before dark.

The sun edged closer to the horizon and soaked the Canyon cliffs in orange. Dad drove us around the valley in search of the perfect camping site, and as time ticked by, any campsite. The place was swarming with tourists. In the back of the Rover, TR shared his dreams of eating barbecue chicken, “Yiros” and lashings of ice-cream when he reached Alice Springs. His vocalised yearnings did not help stave the hunger pains.

As the sun set and the landscape transformed into shades of red, we found a campsite; a little pocket of land not invaded by tourists. The boys played baseball; not with ordinary balls and bats, but with soft drink cans and a stick. However, I had to help Dad prepare dinner.

To compensate for our day of enforced fasting, Dad served up a whopping big tea. For entrée soup, main course rice with carrots, peas, onion, tinned meat and gravy, and to fill any gaps, damper. TR ate his fill of seconds and thirds before the damper while Dad and I offered our damper portions to C2 who seemed to have hollow legs.

And when all was done and eaten, we lay down to sleep contented.

This site uses Akismet to reduce spam. Learn how your comment data is processed.