Ormiston: Around the Bend

‘What? A camel race? There’ll be a fight on their hands if they insist.’ Words actually spoken by Mum when confronted with even the suggestion of a change of plans. ‘We didn’t fly all the way up to Central Australia for the weekend to watch a camel race.’
Most of the T-Team, minus the one who’d made the suggestion (they were absent), nodded.

‘We are going to Ormiston Gorge, and that’s final.’

‘To scatter his ashes,’ my husband, Mr. K added.

The camel race idea slid into obscurity. We spent Saturday morning lazing around at Glen Helen, fighting off flies. One T-Kid resorted to wearing a cloth shopping bag over their head while other T-members bought fly-nets from the store. The T-Team explored the waterhole at Glen Helen, before having lunch with the congregation of flies. Then we travelled to Ormiston Gorge.

The road to the gorge, though unsealed was in better condition than I remembered it in 1981. More tourists, I guess. No. 2 Son and I travelled with Mum (I drove), while Mr. K drove the Ford with No. 1 Son, and my brother’s (MB’s) family piled into their van for the trip. So, we wound our way in convoy to Ormiston Gorge. 3pm and we were spoilt for choice of parks.

‘Most of the tourists have probably moved on or gone back to Alice for the camel race,’ I remarked to Mum.

I swung into a park and then we jumped out of the car.

Mum fumbled with some sealed containers. ‘Now, how shall we do this?’

‘Just divide the ashes evenly in the containers,’ I said.

She divided up the containers and began filling them with ashes.

‘They should be here soon,’ I gazed through the tee-tree bushes. ‘They were right behind us.’

‘I don’t think they would. The kids wanted to swim in the water-hole.’

No. 2 Son bolted. Now that we were at Ormiston, he wanted to see what it was about the place that Grandpa found so attractive.

No.2 Son returned. ‘They’re here, just around the corner.’

Mum and I followed him.

‘What happened to you?’ Mrs. MB yelled. ‘We’ve been waiting here for ages. Could’ve gone to the store, bought souvenirs and come back.’

Mum offered her boxes of precious cargo to them. Our T-Children weren’t sure about taking them, but Mum persuaded them. They’d be honouring Grandpa’s memory.

As the T-Team Revisited, we trooped into the gorge. In late afternoon, the cliffs rose sombre and dusky-pink casting a shadow over the water-hole. The T-Kids gazed at the expanse of water and kept on walking.

Just past the water-hole we climbed up a ridge. When we reached the top, Mum stumbled. Mrs. MB caught her and steadied her. Mum sat down with the announcement:

‘That’s it. I’m not going any further. But the rest of you can.’

The sun caught the cliff-wall opposite, causing it to glimmer a golden orange. A ghost gum sprouting from a tumble of rocks attracted my attention. ‘I remember that tree,’ I said. ‘Dad’s favourite tree in Ormiston.’ After taking a photo, I scrambled down to the tree and scattered Dad’s ashes there.

Up and down the immediate locale of the gorge, the rest of the T-Team Revisited, wandered, silently reflecting on Dad and scattering him where he had many times trekked.

Some hikers tramped past and glanced sideways at us. The T-Team ignored them. Mum watched us from her vantage point. I climbed back up to her to check how she was.

One of the T-kids joined us. ‘The hikers asked us what we were doing and I said we were scattering Grandpa’s ashes. They said, ‘Oh,’ and walked away all quiet. Which was awkward!’

I counted the members of the T-Team who crawled over the rocks and the other side of the rock-hole.

‘I think I saw him go further down the gorge with his Dad,’ Mum said.

Down the ridge, and around the golden wall I hiked. I found No.2 Son marching towards me. ‘I want to see what’s around the bend.’

We strode down the gorge and around a corner or two. Cliffs in hues of blue and purple with just the tips splashed with orange. Perfect reflections in pools.

Photo 1: What’s Around the Bend? 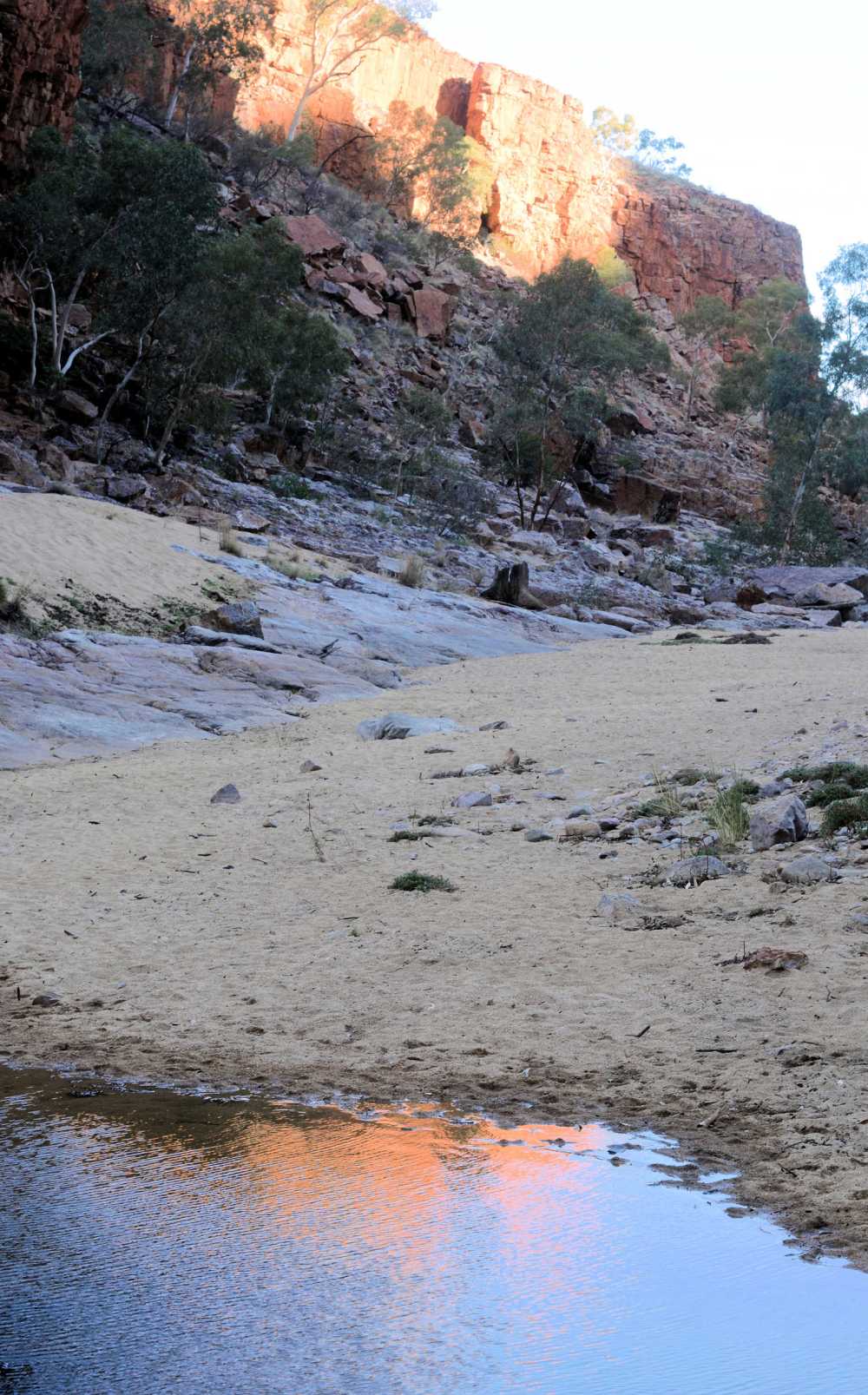 We stormed around the next corner. Ormiston with its majestic cliffs, even in shade of the late afternoon, spurred us onward to explore.

‘Let’s.’ I’d never seen such enthusiasm from No.2 Son to explore nature.

On we tramped, the sand firm under our boots. The gorge cast in hues of mauve enticed us further. More reflections in still pools caught the sun-capped heights of the eastern cliffs.

‘Just one more bend,’ he urged as he raced ahead. 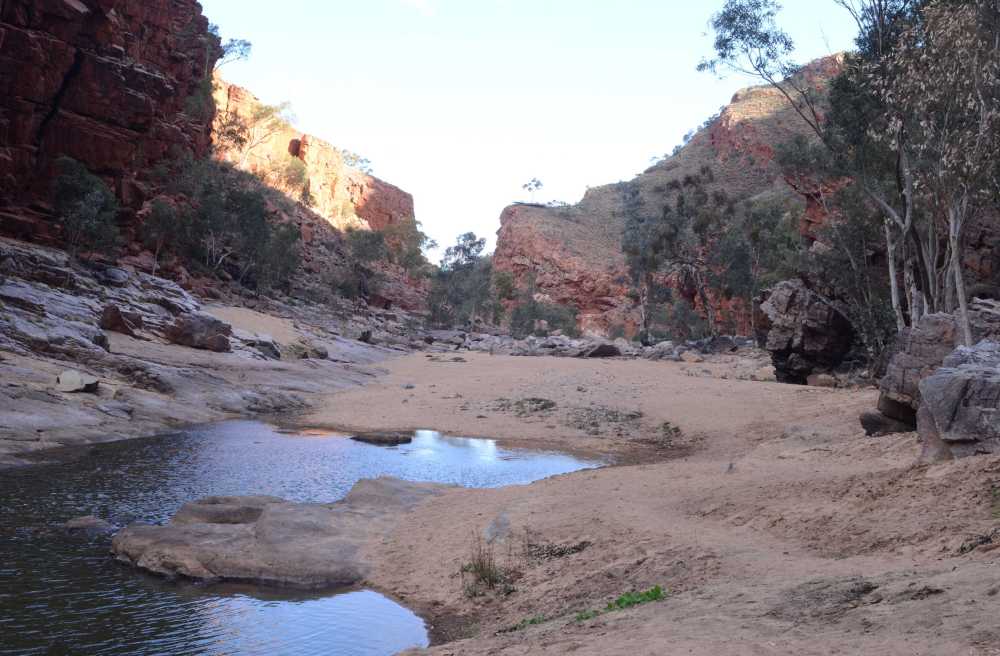 ‘Hoy! Hoy!’ a voice way behind us yelled.

‘But I want to see what’s ‘round the corner.’

‘Too bad! I don’t want to be cooking in the dark—come on!’

As we dragged our feet back to Ormiston’s entrance, No. 2 Son grumbled. ‘Just as I’m getting into this exploring, Dad, you have to spoil it. You want me to get outdoors and then you call me back.’

‘It gives you a taste for another time when we’ll have more time to hike through the gorge to the Pound, okay?’ I said.

We passed the T-kids drying off from their swim in the water-hole.

MB waved from the damp depths. ‘Come on, have a dip!’

I was glad Mr. K moved us on. Wasn’t in the mood for swimming. Like No. 2 Son, I yearned to explore the dreams and secrets, the twists and turns of Ormiston Gorge.

***
A few months ago, Mum was going through her cupboards and discovered two paintings of Dad’s—Ormiston Gorge. ‘It made my spine tingle, it was exactly where we’d scattered his ashes,’ she said.